Mme. Elsie Marechal (Elsie Bell) - 2nd World War heroineElsie Bell was one of seven Yarmouth girls who entered Norwich Training College in September 1913. Her life story and the affect she had on so many allied servicemen escaping from occupied Europe is incredible.

In 1915, after graduating from college, she starting teaching in London where she met Georges Marechal, a Belgian who was in London during the Great War. In 1920 they married.

In 1930 the couple moved to Brussels where they were living, with their two children, in 1940.

In March 1941, the family joined a chain of Resistance against the German occupation, housing and protecting escaped Allied servicemen. In November 1942 however, two Germans, pretending to be American airman were brought to the house and as a consequence the whole family was arrested. Georges was shot, along with other patriots but Robert, their son was released. Elsie (known as Polly) and her daughter (Little Elsie) were violently treated during interrogation but gave away no information and were condemned to death.

After a period in Ravensbruck concentration camp they were sent to Mauthausen in March 1945. Unbelievably within a month, after Polly (Elsie) had become very ill, both she and her daughter were evacuated by the Swiss Red Cross.

The children and mother were reunited and her adopted homeland was freed. Later both children worked in the Belgian Congo.

Mme Marechal never really recovered her health. Her Norwich Training College friends made a collection in 1945 to help her as she had lost her home as well as her beloved husband. She never told her friends of the honours she had been awarded for her bravery and they first heard of them from her son, after her death in March 1969.

Airey Neave (in 'Saturday at M.I.9') gives a full account of the Comet Line to which Elsie Marechal belonged. He says that the family were ardent admirers of Edith Cavelle - fondly remembered in Norwich and Brussels. In Chapter 9, entitled 'The Marechal Affair', Neave includes an interview with Mme Marechal. He is angrily explicit about young Elsie's suffering during interrogation, writing "I thought of her when, as an official of the Tribunal at Nuremburg, I met Goering in his cell three years afterwards."

Throughout her life Elsie never forgot her time at college and was grateful for the influence it had on her.

(based on a paper by Bill Etherington) 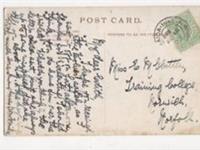